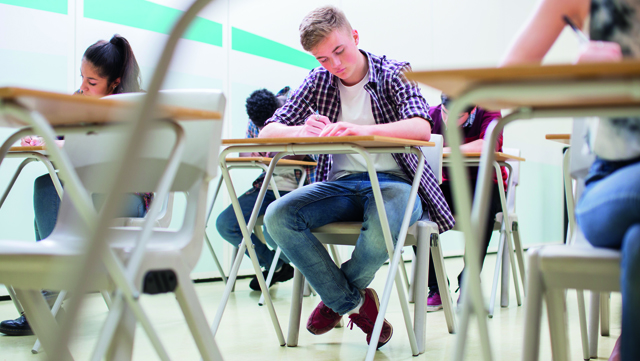 Every young person has something to offer society but how can schools and businesses work together to unlock the potential of those from disadvantaged backgrounds?

Being a white male in the UK is rarely considered a disadvantage. However, research shows that white working-class boys are the most under-represented group in higher education, have the lowest GCSE results, and are more likely than most other social groups to end up in low-paid and insecure jobs after leaving education.

These stark facts were brought to life in 2018’s art-house documentary H is for Harry, a tale of intergenerational poverty and ingrained illiteracy, featuring a charismatic 11-year-old boy who starts secondary school in south London unable to read or write.

Collaboration between Barclays LifeSkills and The Transformation Trust

They also spurred the development of a pioneering initiative – ‘to create meaningful change through employability intervention’ – by Barclays, in collaboration with education charity The Transformation Trust, as part of the bank’s LifeSkills programme. The results have been impressive, generating a blueprint for other organisations to use.

“Everyone has something they’re amazing at; they just have to find out what it is,” says Transformation Trust CEO Amy Leonard. “But students from tougher backgrounds won’t necessarily have the full range of opportunities, and won’t find it as easy to discover what they’re amazing at. So that’s our starting point: to create those opportunities for young people.”

“We had some fascinating discussions with Barclays, and all the data pointed to the fact that white working-class boys are underserved. There didn’t appear to be many structured interventions that were focused primarily on this group.”

Head of Barclays LifeSkills, Kirstie Mackey, explains that the aim was to develop a deeper intervention with a target demographic, building on the LifeSkills scale offering, whereby teachers can download careers-related resources or request volunteers from banking to come into their schools.

“We also work with charities in areas where there are careers cold spots,” she says. “But we looked at what else needs doing in this area and studied government reports around social mobility and the designated opportunity areas. We realised there was a whole cohort of young people who weren’t really getting any support from corporates: white working-class boys.”

The pilot launched in late 2017, providing intensive employability skills training for 50 white working- class boys across 11 schools in Bradford, Ipswich and Oldham — three of the government’s 12 ‘social mobility and opportunity areas’. Schools chose participants from Year 10 (a key point in the educational cycle where a young person’s journey can still be influenced).

The goal was to boost students’ aspirations and support them in acquiring practical skills, while demonstrating how a blended approach to supporting young people delivers the greatest impact, and quantifying the link between improving aspirations and increased motivation to work harder in school. Independent evaluation shows that it delivered on the first three points with further analysis due to quantify the link around increased motivation on GCSE results.

The blended format comprised input from a facilitator (to create a positive and inspiring environment to engage students and enable self-expression), mentors (trusted adults from business offering further support), and schools (helping students to transfer their new skills and attitudes into the formal learning environment and using the sessions to build rapport with students with whom they could not previously engage). It was acknowledged that parents should be involved in future iterations of the pilot.

In practical terms, the boys, accompanied by a teacher from their school, attended six out-of- school sessions (one per half term) led by a motivational youth facilitator, who focused on the core transferable skills vital for the future of work, as well as helping students recognise their existing skills — and link these to aspirations. Sessions were held at inspirational venues, such as local football clubs.

Barclays mentors, from diverse roles and backgrounds, helped with group work and offered one-to-one guidance, while local employers shed light on their industries and career pathways. To provide direct insights into the world of work, students were also offered work experience at Barclays.

Leonard stresses the importance of external influences: “I think having people who were not the students’ teachers or family members taking an interest in them made it feel very different,” she argues.

“We had a fantastic facilitator, Efe Ezekiel; she’s a compelling individual and really takes the group on a journey. She led students through each of the sessions, while the Barclays volunteers were a bit like teaching assistants.

“Barclays is a recognisable brand and that gives the kids a ‘shoulders- back’ moment,” she adds. “People who work for a global bank — serious adults — are interested in them. That, in itself, raises their sights.”

Local role models were equally vital. “There’s a remoteness in ‘oh, we’re all here from London’,” admits Leonard. These guys were from Bradford, Ipswich or Oldham. That helped break down preconceptions and show the boys that they were just ordinary people, some of whom had had very similar upbringings to the students.”

The complexity and diversity of participants’ needs — and the importance of holistic development and personalisation of content — became apparent early on. Some boys had low literacy skills, a difficult home life or lack of support; others had special educational needs and very few had a clear idea of what they wanted to do in future. Nurturing and confidence building was key to developing some participants, while others required challenge and a ‘wake-up call’ to apply themselves.

Everyone has something they’re amazing at; they just have to find out what it is

Mackey explains: “You have to take into account people’s personalities and learning styles. Having so many mentors enabled a more personalised experience. We also had an online platform, where boys could interact with mentors outside of sessions.”

Ultimately, personal development (including self-awareness, confidence, maturity and reflection) was one of the areas of greatest progress, with the vast majority of participants showing noticeable improvement s . These were recognised by attending teachers.

PE teacher Frances Hammond, who accompanied boys from Queensbury Academy in Bradford, shares her personal impressions of the programme:

“The first week, it was interesting watching the students: they sat by themselves and didn’t really interact; they were really nervous,” she recalls.

“Session by session, their confidence began to shine through. As soon as they went into the room, they were shaking hands with students from other schools, interacting with the mentors and other adults. It was lovely to see that they’d changed so much.

“That first week, quite a few of the boys were looking down at their feet when talking, arms crossed. Efe asked them to stand up when she spoke to them and kept telling them to put their arms by their sides, to smile, relax. She got the students to talk to each other and feel they were welcome on the programme.

“Gradually the mentors grew more involved; they were asking the boys questions, interviewing them, looking at CVs. Because the boys’ self-esteem was very low, they probably didn’t feel they had anything to put in a CV. They didn’t do much inside or outside of school, so it was getting them used to trying new things.”

The need to enhance participants’ aspirations was recognised from the outset: where students of school-leaving age lack clarity about the future, they are more likely to become ‘NEET’ (not in employment, education or training when they leave school).

As Mackey says: “We wanted to raise aspirations, or perhaps make them more realistic. It wasn’t about dampening enthusiasm but saying ‘if you don’t become a footballer, what else could you do?’ and having an alternative career plan for them.

“Over a number of sustained sessions, you could really start to see aspirations shift,” adds Leonard. “It’s a switch you can’t flick back off.”

She recalls one student admitting that he struggled and got into trouble at school. However, he added that he loved anything to do with cars and “was always tinkering”.

“I asked him whether he’d like to be a mechanic and he said that he would. But by the end of the session, he was saying he wanted to run his own garage; he’d started thinking bigger.”

This exemplifies her experience with other students. “A lot of boys don’t recognise that they already have skills. Some are carers for a family member; lots are involved in sport outside of school. It’s just a different way of thinking about skills.”

Teacher Rachel Arthur attended sessions with boys from Oasis Academy in Oldham, located in one of the poorest areas in the country. “The boys had really low aspirations; they had no idea what they wanted to be, or what they were capable of achieving,” she explains.

“They’ve all already made at least one grade of progress in their core subjects, double the expected rate. They have a much clearer direction of where they want to be, which has had an impact in their lessons. They are putting their hands up and being more engaged.”

Hammond has witnessed similar attainments at her school, adding: “I’ve really enjoyed seeing these students grow from young boys into adults. They now talk to me in the corridor; they’re happy, smiling. They can go into a room and shake people’s hands.”

She recalls her pride during the programme’s graduation ceremony at Barclays’ London headquarters. “My students had never been to London before; quite a few had never set foot outside of Bradford. You can imagine the excitement. Each student had a panel interview and they did so well. The year before, they wouldn’t have known what to do in that situation.”

According to extensive evidence gathered during evaluation, the programme provided students with greater self-belief and a better understanding of what is valued in the workplace.

Participants gained transferrable skills that are essential for success at work. Their aspirations became clear and they began to realise the importance of working to achieve these career goals.

Overall, around 90% of the participants showed noticeable improvements in most or all of these areas. Ongoing analysis will assess long-term outcomes such as students’ post-16 destinations and GCSE results.

The model will be tested with other year groups and delivered across different timescales to further identify solutions to the barriers young people face.

Mackey concludes: “The boys from this pilot are now in Year 11 and still have some engagement with their mentors. We’re now looking at other groups who need our support, including looked-after children.

“We’re also sharing our materials with government and other corporates to see if they want to take the pilots forward. We have a programme that works and content set up, so we’re quite happy to share it. It’s such an important issue to tackle.”

The LifeSkills programme inspires and supports 11- to 24-year-olds by providing them with key employability skills to help them succeed in the world of work. The programme brings together educators, businesses, young people and parents.

Have you explored a career in finance?

Boosting young people’s confidence as they return to school