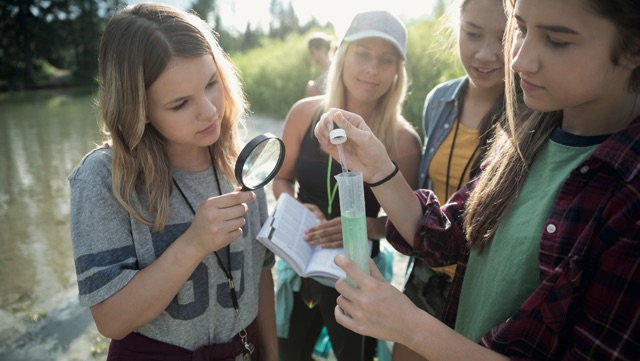 Decades of work and millions of pounds have been invested in making science more inclusive and engaging, with little success – as multinational energy company BP can attest. One of the 2012 Olympic sponsors, BP created and delivered a science roadshow that travelled to schools in every local authority in the UK.

“It didn’t make a long term difference at all,” recalls Ian Duffy, BP’s head of UK communications and community development. “No matter what brilliant, inspiring, uplifting activities you put into schools, it doesn’t matter a jot unless it’s properly integrated in how educators are teaching and guiding kids.”

However, the need to boost and diversify participation in STEM subjects and careers is urgent, both to combat contemporary crises such as climate change and to alter science’s demographics to better reflect society.

Change has been slow over the past decade. “It’s a social injustice that the profile of those who continue in the physical sciences and engineering is so socially narrow,” says Louise Archer, Karl Mannheim professor of sociology of education at the University College London Institute of Education. “I think it requires intervention to right that.”

It was during Archer’s ASPIRES project at King’s College London, a 10-year study to explore how young people form ideas around STEM, that the term ‘science capital’ gained traction. While ‘cultural capital’ (coined by French sociologist Pierre Bourdieu) refers to the accumulation of knowledge, behaviours and skills that give us social mobility, science capital is a conceptual tool for measuring an individual’s exposure to and knowledge of science.

It can be used to aid understanding of how social class affects people’s aspirations and involvement in science and encompasses eight dimensions from scientific literacy to science media consumption.

ASPIRES tracked how young people develop their science and career aspirations from the ages of 10-18, concluding that young people who had higher levels of science capital were more likely to aspire to science-related careers in the future. Conversely, low science capital limits their opportunities and outcomes in life and contributes to the shortfall in young people in the UK choosing STEM subjects.

In 2013, Archer’s concept of science capital was put at the heart of the Enterprising Science initiative — a partnership between University College London, King’s College London and the Science Museum, led and funded by BP — developing the Science Capital Teaching Approach.

The ideas underpinning it were co-developed and trialled over four years between researchers and 43 secondary science teachers in England, in a bid to support educators in helping students find more meaning and relevance in science and so engage more with the subject. The approach aims to ‘broaden what counts’ in the science classroom, encouraging all students to ‘have a go’ at answering open questions, highlighting the diversity of jobs within the STEM sector, and dispelling the myth that science is only for certain types of people.

Teachers personalise and localise their lessons, linking questions to aspects of students’ lives. They elicit knowledge from students that draws on personal experiences, acknowledge the value of their contribution, and link it to aspects of the science curriculum. Finally, teachers support young people to build their science capital, from encouraging them to watch science documentaries to highlighting the science skills integral to the jobs to which students aspire.

Archer and her team worked directly with teachers, helping them to translate theory into meaningful practice. During professional development sessions, educators tried out the science capital approach, tweaking lesson plans in line with the methodology. They then applied it in classrooms, observed by the team, and reflected collectively during subsequent sessions. The initiative was trialled over two years in schools in socially disadvantaged communities in London, Newcastle, York and Leeds.

“It’s a mindset approach, so it works with any curriculum, changing how the teacher thinks about presenting science to young people,” explains Archer. She adds that the practice varies between classrooms. “It’s meant to be very flexible, it has to work with how things are now.”

The initiative concluded in 2018, producing comprehensive resources, including an open- access pack for teachers and the Improving Science Participation policy recommendations.

Participating teachers were overwhelmingly positive about the approach, which generated changes in their professional identities and sense of purpose; provided space for reflection and gave them agency. Almost all have cascaded the approach to colleagues and departments. Both teachers and students reported wider involvement and engagement in classes, including among quiet and/or previously disengaged students.

“When I use the approach, I can see it in their eyes — like meerkats, they pop up and you can see the engagement,” comments one educator.

It’s a mindset approach, so it works with any curriculum, changing how the teacher thinks about presenting science to young people

“I thought I might need to change loads of lessons and tasks,” admits London science teacher Philip Emwangat. “But I realised that it isn’t necessarily drastically changing your tasks, just approaching them differently.”

BP’s Duffy believes the approach completely reconfigures a student’s relationship with science education: “Science stops being something that’s done to them and becomes something they do because it’s part of who they are,” he says.

Evaluation found an increase in students wanting to study at least one science A level; a boost in the science capital of students with previous scores considerably below the national average; improved attitudes to science; a reduction in non-participation in science outside of school, and changes in teaching practice in line with the ethos of the approach.

Young people who experienced the approach benefited from an enhanced understanding of science content and greater personal relevance; they are more likely to describe themselves as “sciency” and behave better during science lessons. “One of the reasons BP funded this work was to create a robust evidence base, to take it away from just being anecdotal opinion, which it has been for decades,” says Duffy.

Ultimately, Enterprising Science attempts to make STEM a more viable and attractive option for all students, especially those from under- represented communities, where science capital is especially low. The team’s pre- and post-initiative surveys show that the work does indeed make a difference, to both teachers and students.

Archer has received funding to establish an equivalent project in primary schools from September this year, and is working with primary school teachers to create a new handbook.

“There’s no cultural norm or expectation for groups who haven’t engaged with STEM traditionally to do anything different; that’s not good enough,” asserts Duffy.

“I hadn’t seen anything over these years that actually had the potential to make a difference until the Science Capital Teaching Approach,” he concludes.