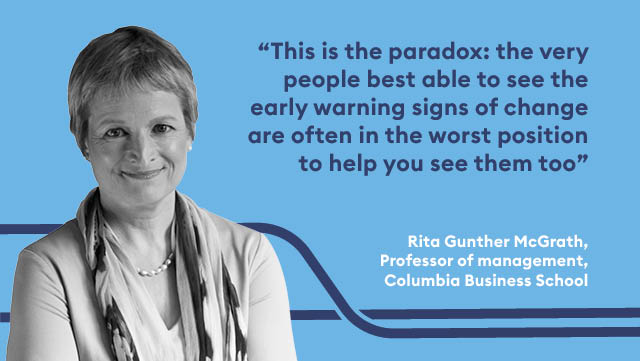 We’ve all heard the stories. The multi-patent-holding chemist at Kodak who warned of the digital revolution. The experienced research and development person at Nokia who pointed out that the bean counters had taken over and the company couldn’t get new products out the door anymore. The scary-smart top engineers at General Electric who urged the company to bet on renewable energy rather than tying its fortunes to fossil fuels.

It’s nearly always the case that someone, somewhere, saw a significant inflection point coming and tried to warn the ‘powers that be’ – to little avail. Ignoring these warnings imperils everyone. And yet, it happens over and over again. Let’s explore why, and what you as a leader might do about it.

In his influential book about inflection points, Only The Paranoid Survive, Andy Grove called people who see issues early ‘helpful Cassandras’ after the Greek prophetess who foresaw future calamities but was not believed. In your organisation, such Cassandras are not typically situated at headquarters or found conveniently hanging out in the business lounge. They tend to be at the ‘edges’; those places in which the organisation touches some element of its environment.

Who are the 'helpful Cassandras' who spot early signs of trouble in your organisation?

They could be technologists who have an “aha!” moment at a technical conference; salespeople who find that customers aren’t responding to their messages as they used to. They could be field service people who note that your offerings are being supplanted in customers’ operations by an alternative. You may never cross paths with these people or hear the critical insights that they possess.

Your Cassandras are unlikely to be members of your organisation’s managerial tribe. They are often technical experts, driven by data (but not necessarily the greatest communicators or storytellers). They may grow impatient when other people don’t grasp what is, to them, obvious and be perfectly content to state their point of view, expecting you to take appropriate action without further activity on their part.

They may well be respected but aren’t necessarily considered to be part of the ‘in’ crowd. And heaven help their message being heard if they happen to be women or otherwise part of an under-represented group.

This, then, is the paradox: the very people best able to see the early warning signs of change are often in the worst position to help you see them too.

How to make use of your 'helpful Cassandras'

What can you do?

To make this easier, some firms institute free-flowing communication channels that don’t depend on hierarchy.

If you do get a whiff of something changing that might be important, fight the urge to dismiss or downplay it. Ask, “is this the first time this person has raised an issue?” If it is, that’s a more reliable resource than a person who is always seeing the sky falling.

Second, consider whether this person has an emotional stake in their observation or recommendation. They are much more likely to see what needs to be done than those with a vested interest in the status quo.

Finally, consider whether what you are hearing suggests that ingrained assumptions about your business may be changing. If the answer is “yes”, you may well be looking at the seeds of a strategic inflection point. The good news is that the leading indicators of a pending inflection are almost always here, today, somewhere. The skill lies in learning to accept their implications.

Rita Gunther McGrath is professor of management at the Columbia Business School.

What does it mean to belong?

In order to make the changes necessary to achieve promises of equity, inclusion and diversity, organisations need to take a...