Business strategy: moving from 'what to do' to 'how to be' 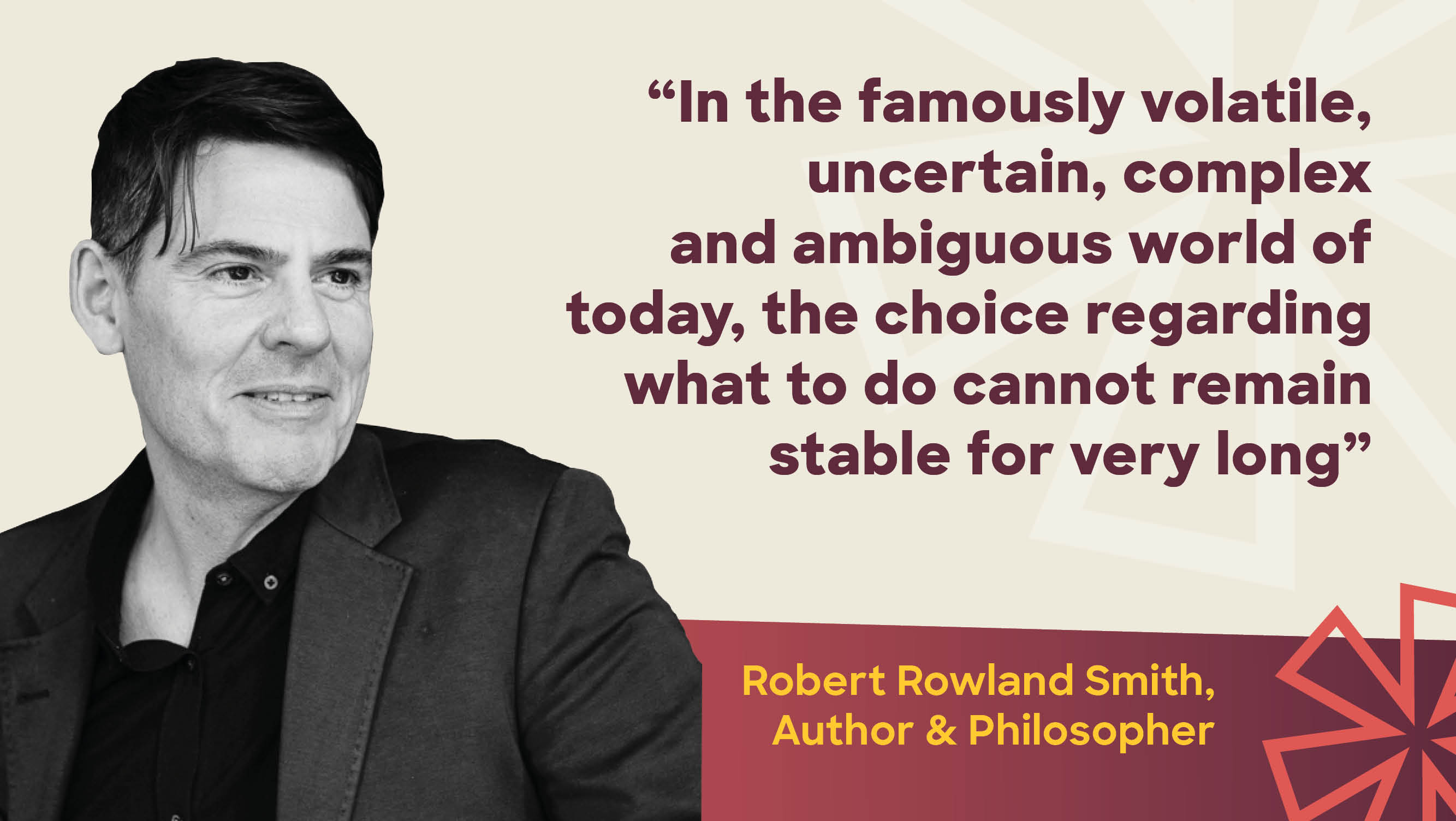 Asking who we should be, rather than what we should do, is the key to recontextualising the role of business strategy, says Future Talent conference 2021 speaker, Robert Rowland Smith.

The word ‘strategy’ derives from a Greek word meaning ‘general’. But the word has also enjoyed two non-military uses, one political, the other commercial.

Politicians will deploy a ‘strategy’, especially in reference to a ‘campaign strategy’ (‘campaign’, also hailing from the military). In the commercial sphere, most modern businesses feel obliged to produce a ‘strategy’, not least for their shareholders and potential investors.

Having said that, the commercial use of the term ‘strategy’ has fallen back from its high-water mark in the 1980s. The Fordism of the early 20th century had focused almost exclusively on efficiency. All businesses could be treated as a variety of factory from which the greatest productivity possible was to be wrung out.

From efficiency, to strategy, to leadership

After the Second World War, however, it became apparent that you could be productive and still not profitable. You might be doing things right at the operational level, but not at the strategic level. Hence the rise of strategy. Instead of cranking the handle faster, the question became which handle to crank.

This new emphasis on strategy of the 1980s went hand in hand with the rise of the management consultancies. These companies, having evolved from their origins in accountancy, were hired less to reduce costs or improve processes than to produce sophisticated market analyses with recommendations on where to generate growth. Strategy came to be seen as the key source of competitive advantage.

But just as ‘productivity’ was displaced, if not deleted, by ‘strategy’, so ‘strategy’ was subsequently displaced by ‘leadership’. The logic went something like this: your business can be operationally efficient, your strategy might be on point, but if your leader(s) cannot inspire people, then the whole enterprise remains at risk.

We are in the midst of a further displacement today, for the notion of ‘leadership’ in a corporate setting is itself losing its lustre. Thus, the coaching and leadership development programmes offered to executives are increasingly viewed as scarcely less basic than health and safety training. Besides, in a networked environment, ‘leadership’ has come to smack of old-school hierarchy that might be a drag on innovation.

Anchoring down 'strategy' in tumultuous waters

Where does that leave ‘strategy’ today? The short answer is that, even if it has been ‘displaced’ by ‘leadership’ and whatever supersedes leadership, it has its uses. It sits alongside productivity, leadership and innovation, as part of a mix. Forgetting about it would be naive.

And yet strategy needs to be refashioned. One of the reasons that strategy fell out of favour was that its horizons were cast too far out. What was the point of a five-year strategy if your industry was on the verge of being disrupted tomorrow? And yet strategy is all about the long-term view. If you replace a horizon of five years with a horizon of five minutes, you can no longer be said to be strategic. You are merely reactive. So, on the one hand, strategy needs to take the long view. But on the other hand, the long-term approach runs the risk of being eaten in the short term. How to escape this dilemma?

The answer lies in shifting the meaning of strategy from ‘what to do’ towards ‘how to be’. In the famously volatile, uncertain, complex and ambiguous world of today, the choice regarding what to do cannot remain stable for very long. One day you might have to buy; the next, sell. One month you take on headcount; a month later you let people go. This quarter it’s software; the next, it’s hardware. And so on. The question of ‘what to do’ will always be adjusting in reaction to market currents.

The choices regarding ‘how to be’ needn’t be quite so volatile. Clearly, if the ‘what’ is ever changing, then the minimal requirement in terms of ‘how to be’ is that we are able to adapt. Adaptation is essential. As, of course, is resilience. Given that any ‘what’ strategy can only be reliable up to a point, we have to rely on ourselves rather than on our projections. We budget psychologically, as it were, for things going differently from how we expected. As a result, we are neither caught by surprise nor stressed by events failing to unfold in the way that we had ordained.

If strategy has a new mode to adopt, it is this: focusing less on ‘what to do’ and more on ‘how to be’ in all circumstances. It is a capability view of the world that should give businesses the strength to prosper regardless.

Robert Rowland Smith is a British author and philosopher. He also works as a business adviser and practitioner of Systemic Constellations.