In December 2015, European Space Agency (ESA) astronaut Major Tim Peake, from Chichester in West Sussex, embarked on his Principia mission on board a Soyuz TMA-19M spacecraft. Launching from Baikonur Cosmodrome in Kazakhstan (the site of Russian launches since the dawn of the space age) with two crewmates, he spent 186 days working on the International Space Station (ISS). He was the first British astronaut to be sent there.

His mission followed a highly successful career as a military helicopter test pilot and British Army Air Corps officer, and was the culmination of six years of (often gruelling) training. This included living underground in a cave system for a week to test teamwork, behaviour and performance in extreme environments, and spending 12 days in NASA’s Aquarius habitat, 20 metres underwater off the coast of Florida, to develop techniques for a mission to an asteroid. In 2012, Peake completed training for spacewalks with both Russian and US spacesuits.

He also had to undergo regular medical testing, such as frequent blood and urine tests, plus muscle biopsies. However, the biggest challenge was learning Russian, which is needed to operate the Soyuz rocket and the Russian parts of the ISS.

“I love systems, I love diagrams, I’m not a natural linguist, and Russian for me has been particularly hard. It’s probably the part that I’ve found the toughest, and at times, the least enjoyable,” he said at the time.

The mission itself was no intergalactic holiday, comprising a packed schedule of maintenance and science duties. Peake worked 14-hour days, undertaking a spacewalk to repair the space station’s power supply, and conducting 250 experiments for ESA and international partners, including 30 tests on his own body.

In his downtime, he ran a virtual marathon, presented a Brit Award to Adele and kept the world updated on his activities via social media. Many of his tweets, selfies and videos are still accessible (for example, if you’d like to know how to use the loo in space, or take a shower, Peake is happy to demonstrate the technology).

After landing back on Earth on 18 June 2016 (with a bit of a bump – astronauts often describe the landing as feeling like a ‘car crash’, particularly because their bones and muscles have weakened in space), Peake endured physical and psychological testing for a further three weeks.

However, all the medical and scientific insights are just a part of his legacy. The ambitious educational programme which accompanied his mission reflects his desire to “inspire a new generation to look at science, to look at space, as an exciting career path, and to make choices that push them in that direction”. 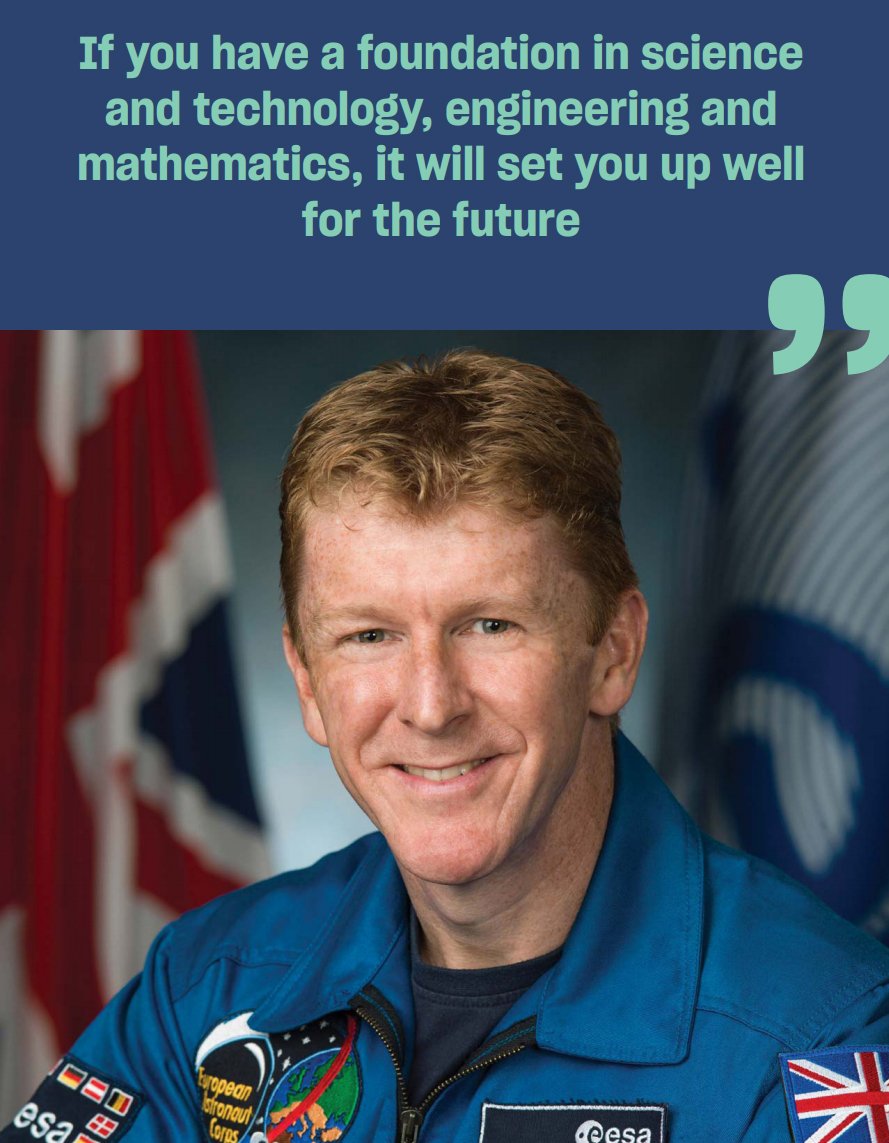 Today, a suite of space resources is accessible to teachers and young people, including The Principia Mission Space Diary, an interactive and empowering STEM learning programme. Here, Peake shares his advice for young people on the value of STEM, careers in the space industry and the importance of enjoying your career journey – rather than focusing on your eventual destination.

On pursuing a career in the space industry

If you want to be an astronaut that’s a fantastic aspiration to have, and you’re also probably passionate about space and engineering and technology as well. Of course, not everybody will be an astronaut. I was selected from over 8,000 people and am extremely grateful and fortunate to have been chosen.

Not everybody is going to be able to fulfil that ambition, but I think what’s important is if you’re passionate about it, you’re probably passionate about working in the space industry, where there are absolutely thousands of career opportunities.

On the diversity side, the female population of astronauts is growing; NASA’s last couple of selection processes have resulted in 50% women.

On enjoying your career journey - not just the destination

I’ve always taken an incremental approach to my career; when I was seven or eight years old, I wasn’t looking to be an astronaut. I’ve allowed the journey to forge its own path, which works for me. I try to encourage people to do that.

I’ve seen people chase an early dream – taking a torturous path to achieve it. They haven’t enjoyed the journey and when they got to the final stage,they realised they don’t enjoy the destination either. I think it’s important to be true to yourself and to enjoy the journey through life, perhaps not worrying so much about where it takes you.

It’s important to be true to yourself and to enjoy the journey through life, perhaps not worrying so much about where it takes you

People have asked me, “what would you go back and tell your 13-year-old self?” I wouldn’t change anything at all.

On the relevance of STEM subjects to all careers

The careers space is fascinating right now, and people are running to keep up with the rate of change and the pace of technology. We’re on the cusp of artificial intelligence, and quantum computing is around the corner, which will be an absolute game changer.

What we do know is that one of the things that will give you a good base is STEM education.

Whatever you go into, even if you’re going into arts and drama, technology is coming into everybody’s world. If you have a foundation in science and technology, engineering and mathematics, it will set you up well for the future.

It will give people the tools they’ll need to be able to adapt to changing careers in the future.

On embracing change and developing resilience

Change is inevitable and [as an astronaut] we have to be able to cope with that, which is why we focus a lot on developing a flexible and a positive mental attitude.

One of the biggest things we get taught is to normalise the abnormal, and to accept change.

It comes back to resilience, really, in terms of embracing unusual circumstances.

A Soyuz capsule is a tiny, claustrophobic, terrible space and if you went in there feeling panicked or thinking “this is it; I just had my last breath of fresh air and now I’m trapped”, you wouldn’t be able to do your job. So you embrace it: it’s your home; your new normal. You become more resilient towards it.

On gaining a new environmental perspective from space

Astronauts who come back are much more aware of how we need to protect our environment. Seeing the atmosphere from space, you realise just how incredibly thin it is; it’s a tiny strip of gas. You see things like sandstorms coming over from the Sahara or wildfires in Canada or America; you see how the smoke and the sands dissipate over vast areas because it’s trapped in a thin strip of our atmosphere, so it has to spread out.

That gives you an appreciation that we’re all breathing the same air on the planet. You see the Amazon rainforest and the disruption there. It really gives you an environmental perspective in terms of looking after our planet. But I think more than that, it actually allows you to think about humanity and who we are as a species. When you’re on a spacewalk, you think “I shouldn’t be here; this
seems to be so unreal. I’m a conscious being looking down on the cradle of life as we know it on Earth”.

We are just part of the universe. I spoke to several astronauts who had that similar feeling. It’s a very difficult thing to process but it certainly does change your perspective.

On the educational legacy of the Principia mission

When I was first assigned to the mission in 2013, I sat down with the UK space agency and we decided that we wanted to have a huge impact with outreach. Education was incredibly important to us. It was important to me, personally, but also for the agency and for the government as we were facing a skills shortage – and still are.

Students were not taking up as many STEM-related subjects as they had in the past and businesses were not getting graduates with the right qualifications in the UK. So we were pushing on an open door when we were trying to build this outreach programme.

We wanted to focus on all ages and also to bring in subjects like art and drama and literature and tie it all to space, so that people could use it as a source of inspiration and education.

We had about 30 projects. Each one had a life of its own and we ended up reaching over two million students, achieving massive engagement throughout the campaign. It goes to show that people are very interested in space and science and technology, and we were able to build on that.

Careers leaders - find out more and see how to invite your students to submit questions and take part!

Tim Peake’s autobiography, Limitless, charts his road to becoming an astronaut. Based on exclusive diaries and video recordings from his mission, it takes readers closer than ever before to experiencing what life in space is really like.

These insights were brought to you by Future TalentEd magazine. 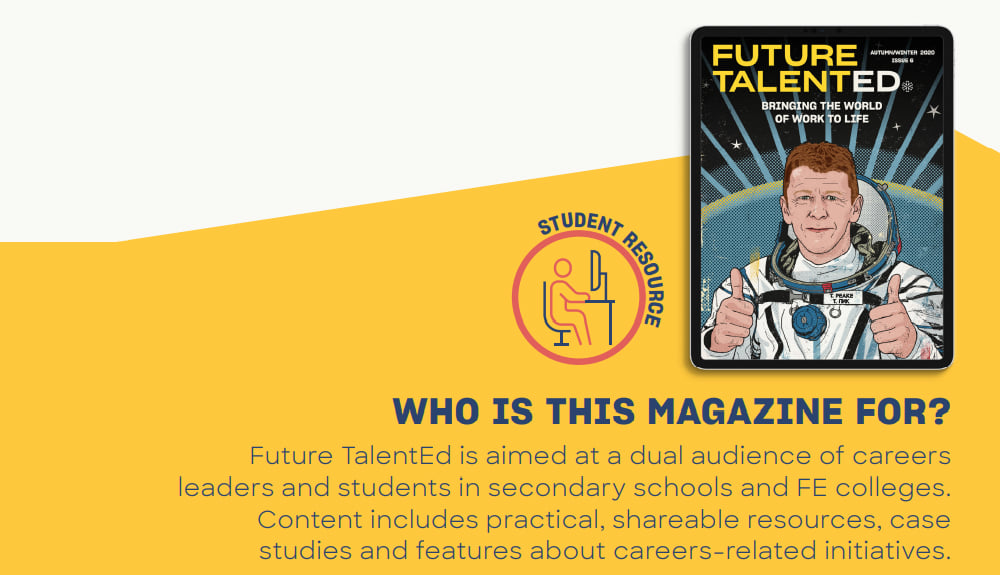 This piece was first featured in our Autumn/Winter 2020 issue of Future TalentEd magazine for careers leaders, parents and students.