Committed to broadening its gender and ethnic diversity, the Royal Air Force offers a wide range of career opportunities for all young people.

We spoke exclusively to the RAF’s chief of the air staff and to youth and STEM leads, to understand its social and recruitment priorities.

With its motto ‘per ardua ad astra’ — ‘through adversity to the stars’ — the Royal Air Force was never going to let COVID-19 sabotage its mission to alert young people to the diverse careers and opportunities that can be accessed by studying STEM subjects.

Where usually, the RAF Inspire programme engages 9-to 14-year-olds through its annual schools roadshow, multi-school and largescale events, residential courses and STEM challenges, the pandemic required a swift transition to digital interactions. Last year, this resulted in the largest virtual engagement programme ever undertaken by the Royal Air Force.

STEM ambassadors were provided with high-tech equipment and training, with remote initiatives including the delivery of a suite of national STEM days to schools. There was even a STEM Summer School, in partnership with STEM Learning, for 60 socially disadvantaged students affected by the initial COVID lockdown. To cater for schools in areas with poor internet connectivity (such as the Highlands and Islands of Scotland) hard-copy resources were sent out and partners engaged to deliver virtual STEM support.

As restrictions continue into this year, the RAF, in partnership with BAE Systems and the Royal Navy, is delivering the largest coding engagement programme for schools ever undertaken in the UK, with a strong focus on social mobility, diversity and inclusion. The Coding Success scheme will provide 600 schools with Lego robotics equipment, professionally delivered teacher training and a series of curriculum mapped coding lessons.

Schools that receive this equipment are also eligible to enter the First Lego League — the largest robotics competition in the world. The Institute of Engineering and Technology, which runs First Lego League in the UK, recently offered £90,000 of funding to helpschools engaged in coding success to enter.

The power of face-to-face engagement

All these, and the many other digital innovations and resources, have been resounding successes, reaching a global social media audience of more than 300 million, according to the RAF Youth & STEM 2020 Impact Report. But they are no substitute for in-person engagement, argues wing commander Russ Barnes, who leads on Youth and STEM.

“I cannot stress enough that digital is not the same as face-to-face engagement; you can’t look a child in the eye and see if they’ve really grasped what you’re talking about,” he says. “COVID has allowed us to amplify our message and spread it to more people, but in many ways it has been limiting.”

He explains that, going forward, a blend of virtual and in-person engagement is likely, with the innovations developed during the pandemic being put to good use. Meanwhile, work is underway on the 2022 schools roadshow.

"If there is one message I’d like to get across, it’s the responsibility I feel for inspiring a new generation to consider careers in STEM and art and design"

“Some of the virtual interventions will stay for ever, but my team is champing at the bit to get back to some face-to-face engagement,” pledges Barnes.

Opening up opportunities to all

The Royal Air Force’s commitment to widening the STEM skills talent pool comes from a desire to help meet the UK’s future demand — within its own ranks and across the aerospace industry. The RAF would not function without talented people in critical STEM roles such as engineers, aviation technicians and medics.

This agenda involves reaching out to more women and people from ethnic minorities and diverse backgrounds — who might not automatically consider a RAF career. The business and moral imperatives for doing so are well understood, as emphasised by the RAF’s chief of the air staff, air chief marshal Sir Mike Wigston.

“If there’s one message I’d like to get across, it’s the responsibility I feel for inspiring a new generation to consider careers in STEM and art and design; to consider aerospace and cyberspace careers, but also to consider a career in the RAF,” he says.

Currently, statistics show that girls have a tendency to drop STEM subjects early, narrowing their opportunities prematurely — something Sir Mike is keen to address. “There’s something in our society that means that, between the ages of 9 and 13, girls decide they can’t do science or engineering. I’d like all young people to get through that age band — and to the important life choices at 14 — with engineering and science still an option.”

"It’s no surprise that we’re finding brilliant young people, who are exactly the kind of people we want to recruit but previously we haven’t been able to, because they haven’t had the opportunities in their education"

To encourage this, he is determined for the RAF to “pool together with colleagues in the private sector aerospace industry and in cyberspace to contribute to the STEM syllabus, and in particular, to support STEM in minority groups and for people in challenging neighbourhoods, who previously haven’t had those opportunities”.

“It’s the right thing to do for society and for individual young people,” explains Sir Mike. “But there is also a business imperative for the RAF to assist schools in opening young people’s eyes to the opportunities in STEM – and particularly in aerospace. From a strategic business perspective, I can’t afford to be competing for talent within a dwindling pool of white, male, grammar school-educated candidates.”

Since the RAF is a base-fed organisation, he is realistic about the time it will take to establish meaningful diversity; but tangible results are already emerging.

“We can’t easily bring in diversity at senior levels; we have to grow our own talent, and they’ve then got 10 or 20 years to rise up through the ranks,” he admits. “However, as we reach out and open up opportunities more widely, it’s no surprise that we’re finding brilliant young people, who are exactly the kind of people we want to recruit but previously we haven’t been able to because they haven’t had the opportunities in their education.”

Gaining a flavour of the Royal Air Force

The RAF’s aim is not to ‘recruit’ 9- to 14-year olds, but rather to instil in them knowledge and enthusiasm around STEM and to offer them a flavour of the Royal Air Force — plus transferable life skills — via its volunteer-led Air Cadet squadrons. These are UK-wide and community based, while the Combined Cadet Force (CCF) is provided through participating schools.

“We’ve been doing a lot of work translating what the cadets get as their standard experiences and through our STEM syllabus into an educationally recognised CV statement,” explains Regional Commandment group captain Al Lewis.

The RAF also partners with the Scouts and Girlguiding to deliver STEM-related resources and activities, through funding provided by the RAF Charitable Trust.

For older teenagers and those in higher education, more direct pathways into the RAF can be accessed via the Air & Defence Colleges (for school leavers) and the University Air Squadrons, which are affiliated to UK universities and offer opportunities for specialist training. 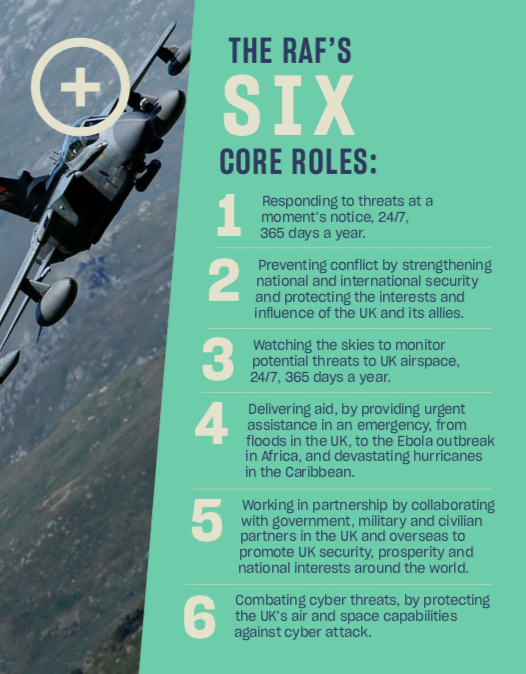 The RAF is about discovering your natural talents

The RAF emphasises that its careers are about helping each person to discover their own natural talents, and to work out what makes them valuable, productive and happy. While “the headline is about flying aeroplanes”, roles for school leavers and graduates are wide-ranging, encompassing many different specialties at different levels. Entry requirements vary by job, but applications require a minimum of English and Maths at GCSE.

What kind of roles are there in the RAF?

As a graduate, for example, you could apply to become an RAF intelligence analyst, interpreting foreign language transmissions using state-of-the-art surveillance systems and providing vital intelligence to support military forces deployed around the world.

Or you might follow a different route, opting to work as an engineer officer responsible for leading the engineering activity that supports the RAF’s array of information technology, strategic communications services, satellite communications, air defence RADARs and the latest generation aircraft engineering and mission support systems.

As an apprentice, you might train as a cyberspace communications specialist, setting up, operating and maintaining the technology the RAF relies on to communicate — or as a chef, preparing food at five-star themed banquets one day and cooking in the field the next.

"Some of the virtual interventions will stay for ever, but my team is champing at the bit to get back to some face-to-face engagement"

“We have 60 roles available, of which 22 are apprenticeships,” explains squadron leader Paul Duffy, chief of staff ATTRACT. “There are no roles within the RAF that are not open to women and we have a target of being 20% BAME and 40% female by 2030.” He adds that in addition to rewarding roles and structured career development, benefits include subsidised food, reasonable rental rates and access to sports facilities.

How can I apply?

Applications can be made via the RAF recruiting website, with staff from the Armed Forces Careers Offices on hand to provide guidance. “We look after the applicant all the way through the process, so there’s always somebody to help allay their fears or explain the pathways into any role within the RAF,” stresses Duffy.

During COVID restrictions, the RAF (with the help of an industry partner) created a virtual workspace, via a platform called Access All Areas, for online recruitment events. “People can enter this, look at an area they are interested in joining and have a chat with somebody doing that job,” explains Duffy.

“It’s set up as it would be on an RAF unit, with the backdrops of the particular area. That has been a success story, and we have online events planned for March, but we do want to do in-person again once COVID has lifted.”

Find out more about the different RAF roles and how to apply via the website. 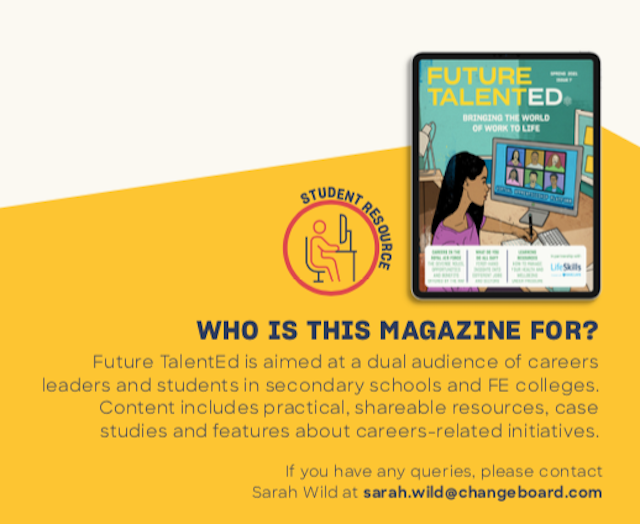 This piece was first featured in our Spring 2021 issue of Future TalentEd magazine for careers leaders, parents and students.

Find out how university student James Elgar become an app creator and social activist during lockdown, in an interview with...

Maria Eitel, founder of The NIKE Foundation and Girl Effect, provides advice for young people leaving school this summer – at a...

RAF chief of the air staff Sir Mike Wigston shares his insights on what a career in aerospace can offer young people.