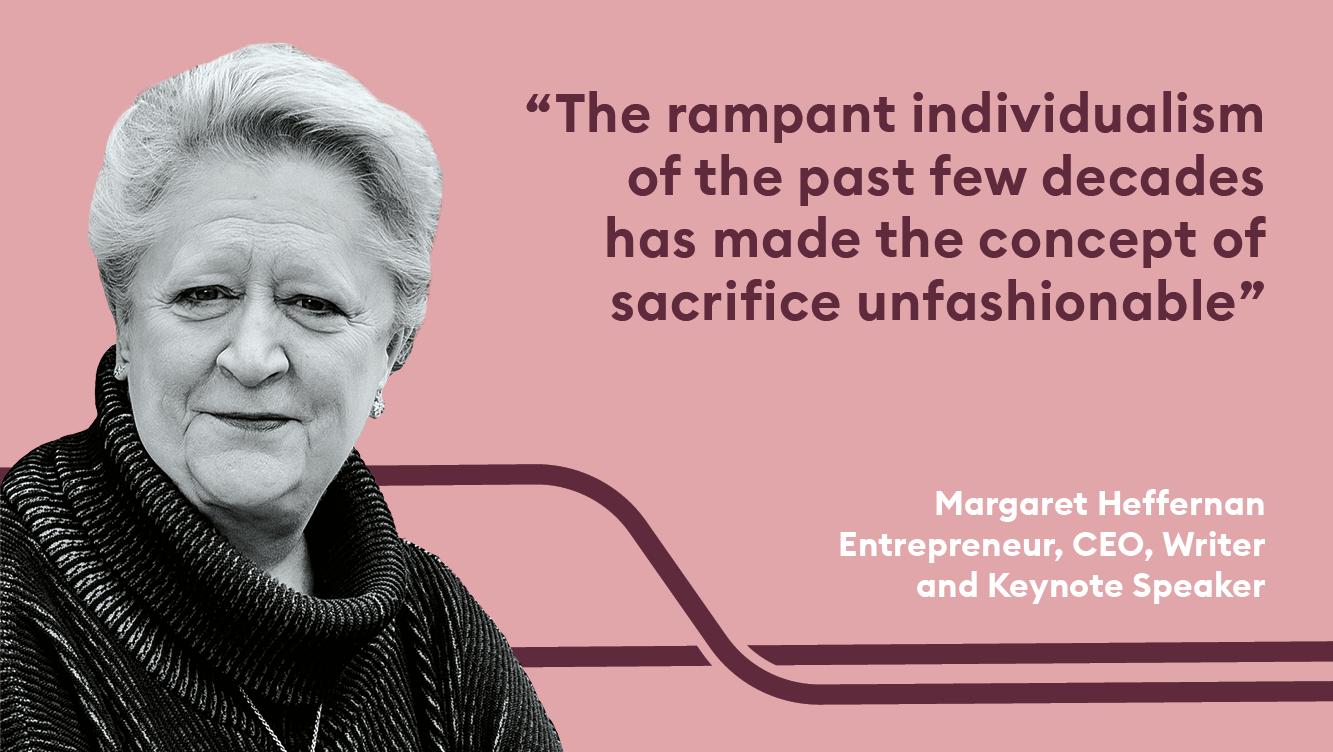 In these volatile and uncertain times, work must be redesigned around people and purpose, writes Margaret Heffernan.

It used to be that leaders just needed to know how to sell things for more than they cost. That was often hard enough. But now the tables have turned. Profit isn’t always a requirement — but satisfying multiple constituencies is.

Today, employees crave work that has meaning beyond money. They want to feel that the time and effort they invest in work serves more than their boss and their landlord. It doesn’t seem unreasonable to expect some intrinsic satisfaction from work — on top of the whole shiny basket of extrinsic incentives that many managers believe condition productive behaviours. But if you’re leading in a business with razor-thin margins — which most are — accommodating these demands is difficult.

The erosion of our capacity to think

And that’s only the beginning. Just as Bangladeshi garment workers require safe working conditions, both gig workers and corporate strivers demand that the hours and conditions under which they work don’t damage their cognitive or human capacity. Long hours, excessive time spent with technology, working nights and weekends: all of these, we now know, erode our capacity to think — even though thinking is what most of us are paid for these days.

Although we’ve known, since the first productivity experiments in 1888, that human capacity declines precipitately after about 40 hours a week, few employers bow to the science.

Yet you don’t have to believe it for it to be true – so flying in the face of over 100 years’ evidence is having entirely predictable results, in the form of burnout, mental illness, errors, accidents and disengagement. Increased productivity won’t be achieved by sweating your human resources.

The need for greater resilience

The current volatility of the working environment demands resilience from everyone. This is both the physical resilience of recovery from crunch mode, and the intellectual and imaginative resilience to embrace and experiment with new ideas, casting aside what won’t work and moving on to find what does.

The best response to uncertainty is a high level of experimentation, but that means that much of what is tried will fail. For all that writers are rhapsodic, talking about the long-term learning that failure offers, they gloss over its immediate emotional cost. Invent a new app or product or service that fails; sure, it’s learning — but abandoning fantasies of glory and triumph hurts. Anyone who tells you otherwise hasn’t taken any real risks. Recovery takes time and stamina.

And if all of this wasn’t tough enough, any leader who isn’t wilfully blind must now confront the challenge of legitimacy that global warming presents. We’ve known about this for 30 years now but, taken as a whole, business response has been little, late, lazy and often evasive.

What motivates people most is each other

The time left to repair the planet is short and this decade will segregate, with pitiless clarity, those who listen to their children from those who listen to no one. The position of business and government as sources of solutions has never been regarded with greater scepticism and the race is on to see who earns a licence to operate.

This might sound scary and, to unseasoned managers, it is. Those with more experience need now to dig deep to remember what years of booming economic growth have obscured: that actually what motivates people most is each other.

What gives work meaning isn’t key performance indicators or targets or the ephemeral hedonic satisfaction of extrinsic reward, but a sense that the work helps to make the world a better, safer, more just place. Decades of social science illustrate that what makes communities truly resilient isn’t how rich they are but how far the people in them know and care about each other.

Recently, contemplating the volatility and uncertainty of the times ahead of us, I interviewed a number of leaders who had navigated existential crises in the past: moments when their businesses and sometimes they themselves stood on the brink of collapse. These were unforgettable, gut-wrenching conversations and in each case, at some point, each of my interviewees wept.

What, I wondered, had kept them going through years of agony? Just two things. First, they were lucky enough to have friends who understood, who cared about them, who provided moral and emotional support. Second, they knew that the sacrifices they and many of their colleagues had to make were for a good cause, one bigger than themselves. That was enough to keep them at their gruelling work long and hard enough to survive.

An end to rampant individualism

The rampant individualism of the past few decades has made the concept of sacrifice unfashionable. Social norms more often target our selfishness than our altruism. But change never occurs without sacrifice. And the changes required by the climate crisis, by the rising rates of mental illness, by the redesign of work won’t occur without much in the status quo being assigned to history.

As individuals, we accept sacrifices when we know that they are necessary, when they make us feel active in the face of otherwise paralysing threats, and when we believe they are shared equally. We embrace them because they confer a shared sense of nobility, speaking to our deepest sense of value and meaning.

That’s why it is important to call them out for the sacrifices that they are so that together people can feel valuable to one another. The challenge for leaders in this new decade will be to model sacrifice, to define it with care and justice and to inspire it in others.

In doing so, all the various demands for purpose, meaning and resilience will be met as we return to the source of work’s value: that we do it for each other.

Register for insights and updates or implement one of our levy-funded leadership programmes by clicking on the buttons below.

Is this ‘the Great Resignation’ or the ‘Great Re-engagement’? 4 learnings from senior HR leaders